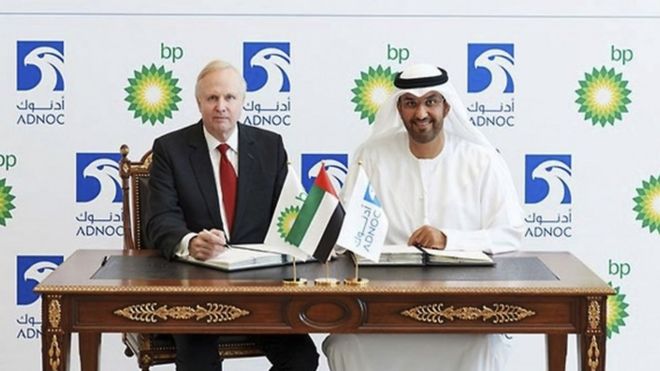 Abu Dhabi has become one of BP’s biggest shareholders under a deal which gives the oil company a much bigger stake in the emirate’s oil output.

BP will take a 10% share in ADCO, which owns onshore oil fields that account for most of Abu Dhabi’s production.

The deal will dramatically raise BP’s share of oil and gas production in the emirate, from 95,000 barrels of oil a day to 260,000 barrels a day next year.

In return Abu Dhabi will receive a 2% stake in BP worth almost £2bn.

That would put Abu Dhabi among the company’s top 10 shareholders and ahead of Kuwait, which owns a 1.7% stake.

Currently the investment firm Blackrock is the biggest single shareholder in BP with a 5.4% share.

In a statement, BP’s chief executive Bob Dudley said: “This agreement will provide BP with long-term access to significant and competitive resources that we already understand very well.

“We will bring our people, cutting-edge technology and experience of managing mature giant fields around the world to help maximise recovery from these assets.”

BP’s business ties with the United Arab Emirates date back to the 1930s when it set up a depot in Sharjah, Dubai to refuel the first aircraft travelling from the UK to India.

In Abu Dhabi it owns stakes in several oil and gas operations, including a 15% interest in offshore oil and gas fields.

In November BP blamed the falling price of oil for a near 50% fall in third quarter profits.

It has been cutting back its investments in new fields to help restore profitability.

In October it announced that it was abandoning a plan to drill for oil off the south coast of Australia.