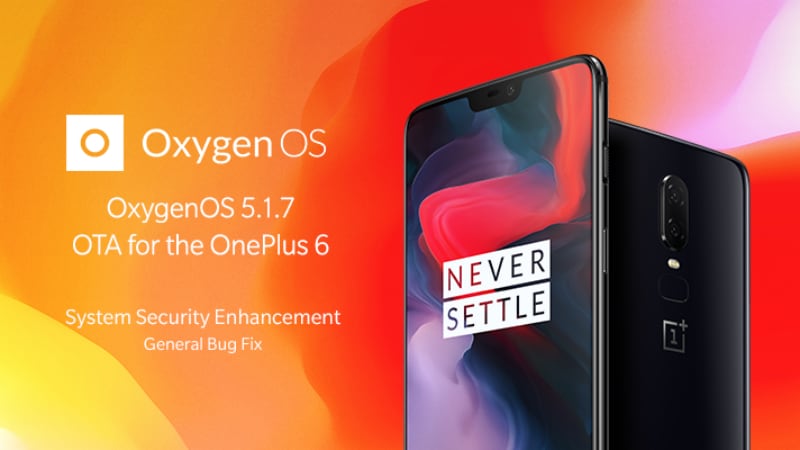 Chinese phone maker OnePlus on Thursday announced the rollout of the latest OxygenOS 5.1.7 OTA update on the OnePlus 6. This software update fixes the scheduled setting issue for Do Not Disturb (DND) mode, brings an updated bootloader for system security enhancement, and brings general bug fixes and improvements. This update will not be issued on Indian units, considering the last update, OxygenOS 5.1.6, has been reported to have stability issues for users in India. Alternatively, OxygenOS 5.1.8 – with a fix and all 5.1.7 features – will be rolled out next week.

In a OnePlus forum post, the company announced that the OTA update will be issued in an incremental manner – it will reach a small percentage of users initially, and a broader rollout will follow in the next few days. As per comments on the thread, file size of the update is around 64MB. The company in its blog post said that the OxygenOS 5.1.6 update had caused stability issues for users in India, and that the update rollout had been paused. The company is working on fix based on the logs received from affected users, and the OxygenOS 5.1.8 update released next week will contain the fix as well as everything else that OxygenOS 5.1.7 brought.

To recall, earlier this week, a vulnerability on the OnePlus 6 bootloader was found that could potentially let an attacker boot a modified firmware image without unlocking the bootloader. This presented a security risk, as anyone with physical access to a OnePlus 6 smartphone could bypass bootloader protections and potentially gain root access to the device. The vulnerability was discovered by Edge Security, and at the time, OnePlus had said it would fix the issue in an upcoming software update. The OxygenOS 5.1.7 OTA update addresses this issue, fixing the bootloader to prevent the loading of a modified firmware image without unlocking the bootloader.

In terms of optics, the smartphone bears a dual rear camera module that includes a 16-megapixel primary sensor and a 20-megapixel secondary sensor, with f/1.7 aperture, OIS, EIS, and dual-LED flash. On the front, the OnePlus 6 features a 16-megapixel selfie camera, with f/2.0 aperture and EIS. There is a 3300mAh battery under the hood, with support for Dash Charge. Connectivity on the smartphone includes 4G VoLTE, Wi-Fi 802.11ac, Bluetooth v5.0, NFC, GPS/ A-GPS, USB Type-C, and a 3.5mm headphone jack.